Many articles about the scooter rental industry refer to the "It’s easier to ask for forgiveness than to get permission" approach taken by the companies towards Cities to overcome government barriers in the form of their regulations. The strategy is simple:

A tool in the battle for market share is to introduce switching costs for renters. For example, by requiring a renter to have a positive money balance on their account through pre-paying in units of $10 or more at a time, a company makes it more likely that when a renter has the urge to use a scooter and is faced with a choice of brands, they will choose the one for which they already have a balance on their account.

In San Diego, leaving scooters on sidewalks for rent was a violation of multiple municipal laws, which prohibited rental companies from using the streets to rent vehicles or run a business without a permit, prohibited obstructions being left on sidewalks and placed a legal liability on adjacent property owners to remove such encroachments or face legal consequences if someone was injured by such an obstruction.

The City of San Diego moved with alacrity to force homeless people to remove their belongings from sidewalks, yet for well over a year it did nothing whatsoever to address the pedestrian safety issues parked and fallen scooters posed when they encroached our sidewalks.

Why nothing was done for so long is a matter of speculation. However, that inaction capped a history of bribery and corruption associated with the City's political leaders the reputations of which have been tarnished by allegations of corruption over many years. It further alienated many citizens and added to a wide-spread cynicism by them towards the City. 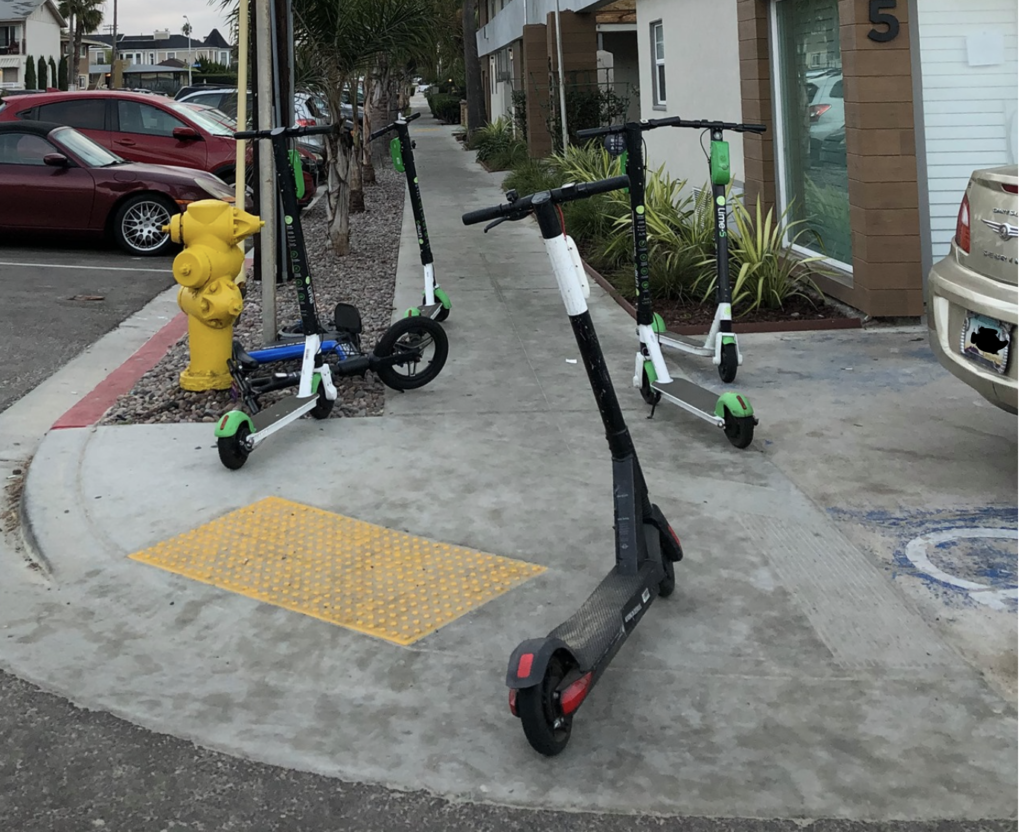 October 2019: Bird, Lime and Wheels scooters blocking disability ramp, home driveway access for the disabled and pedestrians generally as well as posing a hazard of injury.

In using public spaces like sidewalks to display their products and make them available for use the companies not only created a hazard for pedestrians, especially after dark and for the blind, they also induced another problem, sidewalk driving. Although driving a motorized scooter on a sidewalk is legal in some US states, that is not the case in California where it is illegal, CA VC 21235 (g).

The rush to market not only reflects an insensitivity the companies have had to the effects of their industry on public safety, it also reflects the direct and willful efforts that have been made to undermine it e.g. the successful initiative by Bird Rides Inc. to remove the requirement in California that adult riders wear a helmet.

In California in 2002, a new "personal mobility" device was launched to claims that it would revolutionize transportation. Created by Dean Kamen, the product was called the "Segway", a self-balancing, two-wheeled, electrically powered platform, with an upright pole and handlebars at the front that a 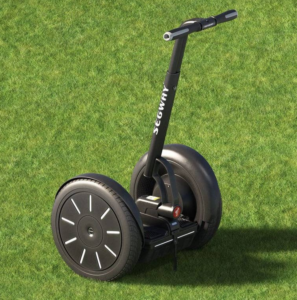 person could stand on and direct the movement of by shifting their body weight, as demonstrated by former US President George W. Bush.

The device was a market failure for a number of reasons including its high price, heavy weight and short battery life and eventually found limited markets with tour companies and mall security.

However when the hype was still fresh and the lack of success unknown, the Segway company sought to change the laws of California and elsewhere to permit Segways, (referred to in the California Vehicle Code as Electric Personal Assistive Mobility Devices, (EPAMDs), to be driven on sidewalks and it succeeded.

Today the California Vehicle Code still reflects the hype of those early years when the Segway was new, declaring:

Although the law was changed to the benefit of the Segway company amid overblown claims of benefits that proved to be false, that did not prevent the same playbook being used effectively by motorized scooter rental companies, only sixteen years later.

It's worth noting that in 2018 the City of San Diego agreed to a $1.7m settlement with a woman who in 2015 was severely injured after falling off a Segway when she "...drove a Segway over a large area of broken and damaged street...".

CA Had Safety Regulations For Rented Motorized Scooters For Decades

In California in early 2018, the scooter rental company, Bird Rides Inc., which was established in Santa Monica and launched its products in late 2017, sponsored a bill in the State legislature that would have made significant changes to the laws governing motorized scooters. Existing laws at that time:

But Safety Regulations Were Not Good For Business

The existing regulations were an impediment to market adoption for the new "ride-share / leave them anywhere" companies like Bird.

For example, the regulation that all users must wear a helmet did not fit well with the cool image scooter companies like Bird were promoting, that anyone could conveniently use their vehicles whenever needed and could leave it wherever they wanted to. Because most users would not wear a shared helmet the companies did not provide helmets with their vehicles, nor did users, who, in San Diego were most often tourists, carry one around with them. The helmet law opened adult users to fines for failing to wear one and therefore reduced the convenience of renting a scooter. Also, for many users, wearing a helmet did not look "cool". So Bird decided to change the law, much as had been done previously for the Segway.

To sponsor a bill in California a company can simply write it and find a member of the legislature willing to introduce it. Ideally that legislator should find other legislators willing to support it. In this case the bill to change the law, (AB2989), was sponsored by Heath Flora, a legislator representing a rural Central California district in which motorized scooters were unlikely to be offered for rent.

However, the bill was also sponsored by a powerful Democrat, who was also Majority Whip in the State Assembly, Todd Gloria, who, in 2021, became the Mayor of San Diego, and who, prior to being a member of the California State Assembly was a member of the San Diego City Council, representing District 3, which includes downtown. A supporter of the removal of the helmet requirement for adults, Gloria also suggested that the City adopt some sensible requirements when it was considering introducing regulations to govern the scooter rental companies in 2019.

In fact, AB2989 as originally proposed would have done much more than remove the helmet requirement. It proposed to remove many long-standing safety requirements by:

The original bill was significantly amended and many of those proposals were rejected. In the end AB2989 removed the helmet requirement for adults, (18 and over), and allowed motorized scooters to be driven on roads faster than 25mph, (40kph), up to 35mph, if there is a Class 2 or 4 bike lane present, (otherwise they may only be driven legally on 25mph, (40kph), roads).

These changes came into effect in California on January 1st. 2019, despite legislators and the Governor having no data on the injury rates of motorized scooter renters and it was not until January 2020 that data was available to enable comparisons. The results were and are alarming.

In hearings the argument was often made to both the State and City that "scooters are just like bicycles" and should be treated as such, (in California adult bicycle riders are not required to wear a helmet), and the risks associated with driving a motorized scooter were simply assumed to be equivalent to those for riding a bicycle. It was obvious that this was an incorrect assumption as from the outset scooter users, unlike cyclists, often chose to drive on sidewalks and other walkways because they felt unsafe to drive in the street. In doing so they endangered the safety of pedestrians. An article in the Journal of the American Medical Association, (JAMA), regarding scooter injuries, published in January 2020, states:

"There was a dramatic increase in injuries and admissions from 2017 to 2018 associated with e-scooter use. …"

"Nearly one-third of patients had a head injury, more than double the rate of head injuries experienced by bicyclists.” (Emphases added)

As with the Segway, support for changes to the legislation also resulted from claims made that shared motorized scooters would benefit the environment and help people get around. As explained in this site, the claim that driving a rented scooter reduces carbon emissions is an illusion as is the claim that rental scooters are an effective solution to the First Mile Last Mile transportation problem. Nonetheless, they were accepted at face value by politicians in a state keen to address the problems of climate change, and where, increasingly, cars are seen to be undesirable.

In September of 2018 Bird held a publicity event to announce their Community Program which was claimed  to enable the reporting of dangerous driving. Joining them on the podium were Assembly Member Todd Gloria and Council Member Chris Ward, both singing their praises. With no unique identifier on the scooters reporting sidewalk driving and other dangerous driving is virtually impossible.

Also in 2018 Bird ran their Save Our Sidewalks campaign, in which they claimed they would donate one dollar per scooter per day to the City of San Diego to help build bike lane infrastructure. A public records request to the City asking how much had been donated revealed the sum to be $0, but having made the announcement that alone led to numerous people believing that was in fact what they were doing.

The companies' estimated future profitability may be overestimated.

Income is determined by the price charged to the users, which is usually in terms of an access fee to initiate the vehicle, (Access Fee), and a per minute fee charged based on the duration of its use, (Use Fee), the number of users that want to rent a scooter for a trip, (Users), the number of trips they make, (Trips), and the duration of those trips, (Duration). Therefore:

The number of users, the number of trips they want to make and the duration of those trips can be collectively termed "Demand". Demand is something that safety advocates can influence and adequate effective pedestrian safety measures may not have been factored into estimates of future profitability.

Just as scooter rental companies sought to remove safety regulations in order to boost demand, so pedestrian safety advocates who argue for safety measures are opposed because that could diminish demand.

Note that anti-scooter groups have taken to vandalizing scooters, actions that are both illegal and dangerous and we do not advocate anyone take such action.

It is remarkable to us that the City of San Diego has not publicized and educated users regarding the risks, the injury rates, the lack of insurance coverage and so on. Could San Diego be turning a blind eye to these risks on the grounds that it is OK for tourists to visit the city and go home in a body bag so long as they do so quietly?

It falls then to safety advocates to do so and also to propose:

Overall then we believe that backers of scooter companies may have underestimated the impact that the understanding of the dangers of using motorized scooters will have on demand, and that, over time, that understanding will grow. 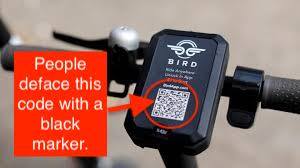 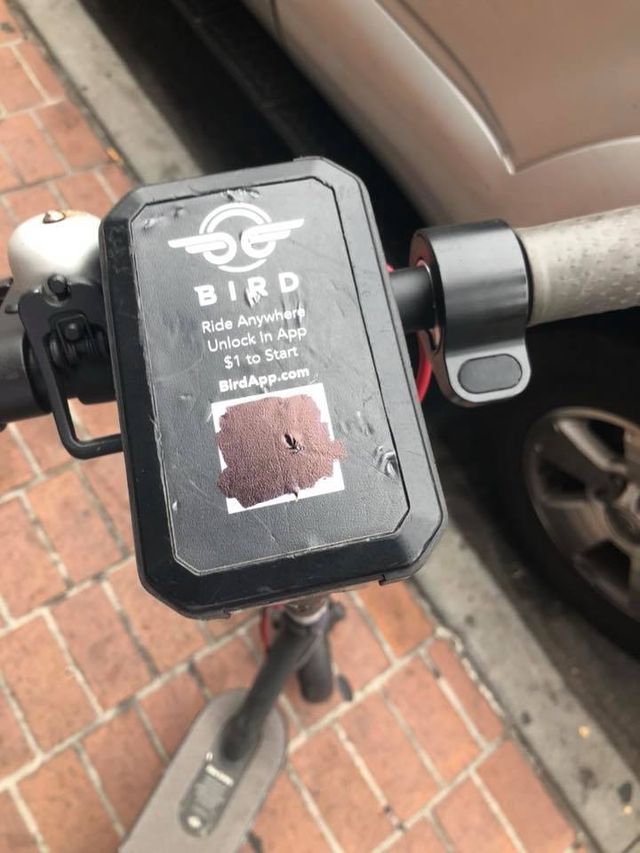 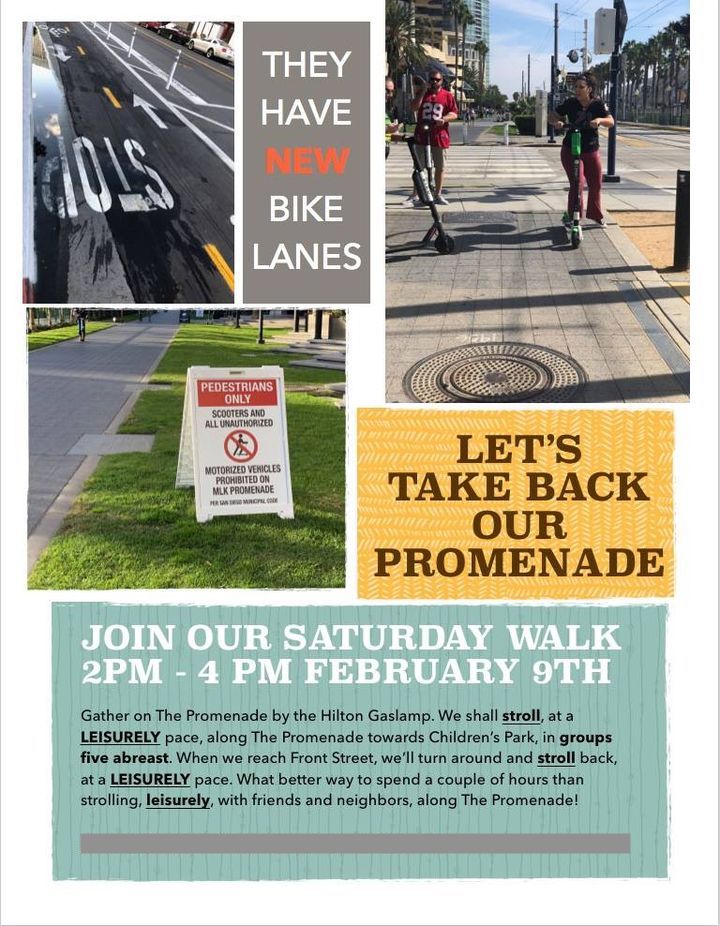 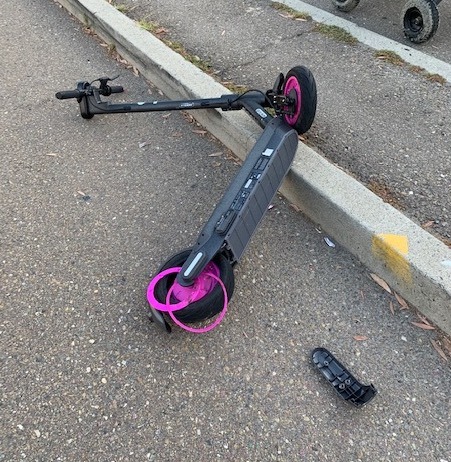 Can you be sure that your scooter is well-maintained? 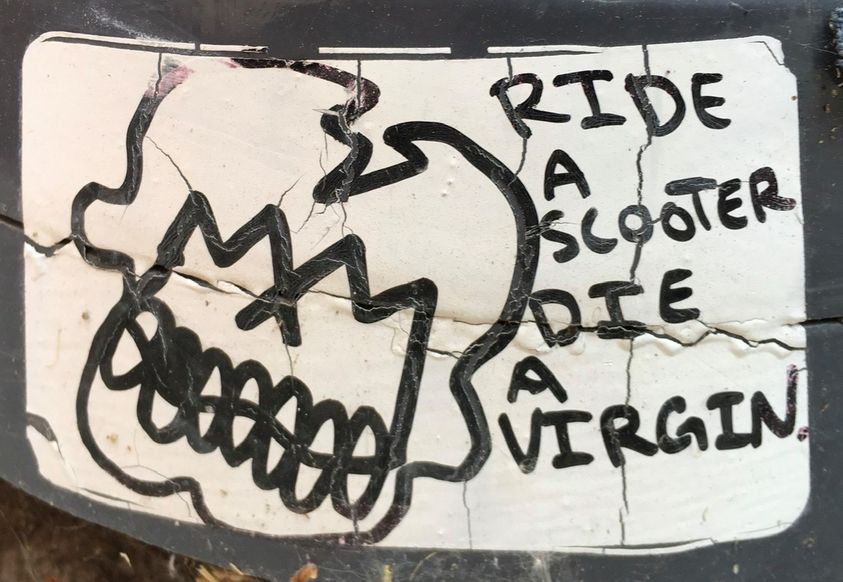 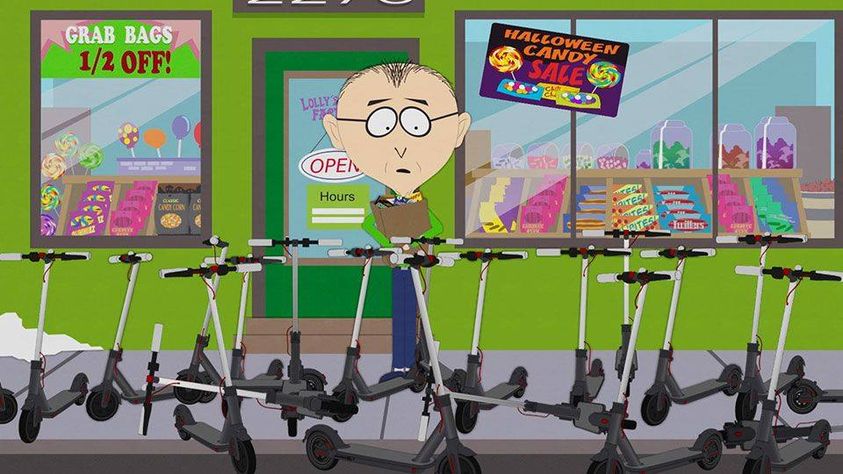 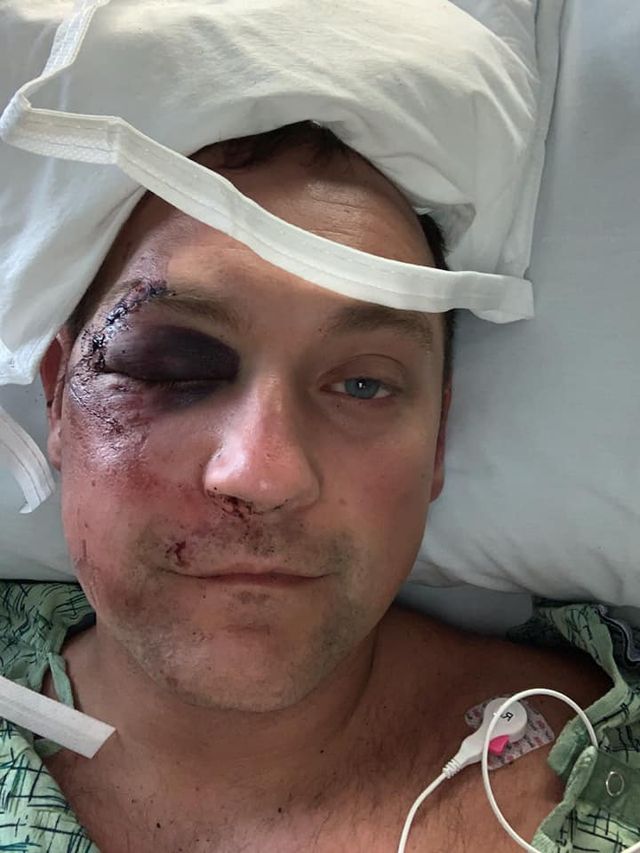 Did not "enjoy the ride".