Assembly Bill 371 amends Section 2505 of the State Civil Code, which already requires Shared Mobility Device companies to carry commercial liability insurance of $1 million for single accidents and $5 million in aggregate and adds a new section, 2506, to include Braille for the QR code on the vehicle.

Section 2505 was passed in 2020 and did not devastate the Shared Mobility Device, (SMD), industry since this level of insurance is a normal cost of doing business. Premiums are not excessive because the companies are rarely responsible for the accidents. In fact, we expect that the companies carry more insurance than this minimum since judgments can be more than this. For example, in 2019 the City of San Diego paid $1.7 million a few years ago related to a Segway accident.

The current law also requires the SMD companies to cover renters for any company negligence. Previously the rental contracts often excluded the renter from suing the company, even if the company was negligent, such as renting a vehicle with faulty brakes. Again, that extension of coverage to renters did not hurt the SMD industry because, of the accidents involving rented motorized scooters, the most popular device offered, most are not related to company negligence. As a matter of public policy though, when a company is at fault it should not be able to avoid responsibility by using the contract terms a person signs when they open an account. Hence, the current law was passed.

The proposed legislation is currently under review in the California Senate. If passed AB371 will provide protection to pedestrians by requiring that drivers of rented motorized scooters - indeed all renters of shared mobility devices - are provided with third party liability insurance. Both the bill itself and a fact sheet about the bill are available in our San Diego Information box to the right.

Here's what it does:

Items 1 through 3 and 5 and 6 are straight forward.

Item 6 provides much needed information to the users who often mistakenly believe that their auto insurance covers them when driving a rented scooter and item 7 enables a vision impaired person to report the potential or actual cause of an injury.

This bill is worth supporting. We have already submitted our letter of support and suggestions for amendments to the Senate Insurance committee.

Every letter of support from the public helps. Please send in yours.

To support the legislation: 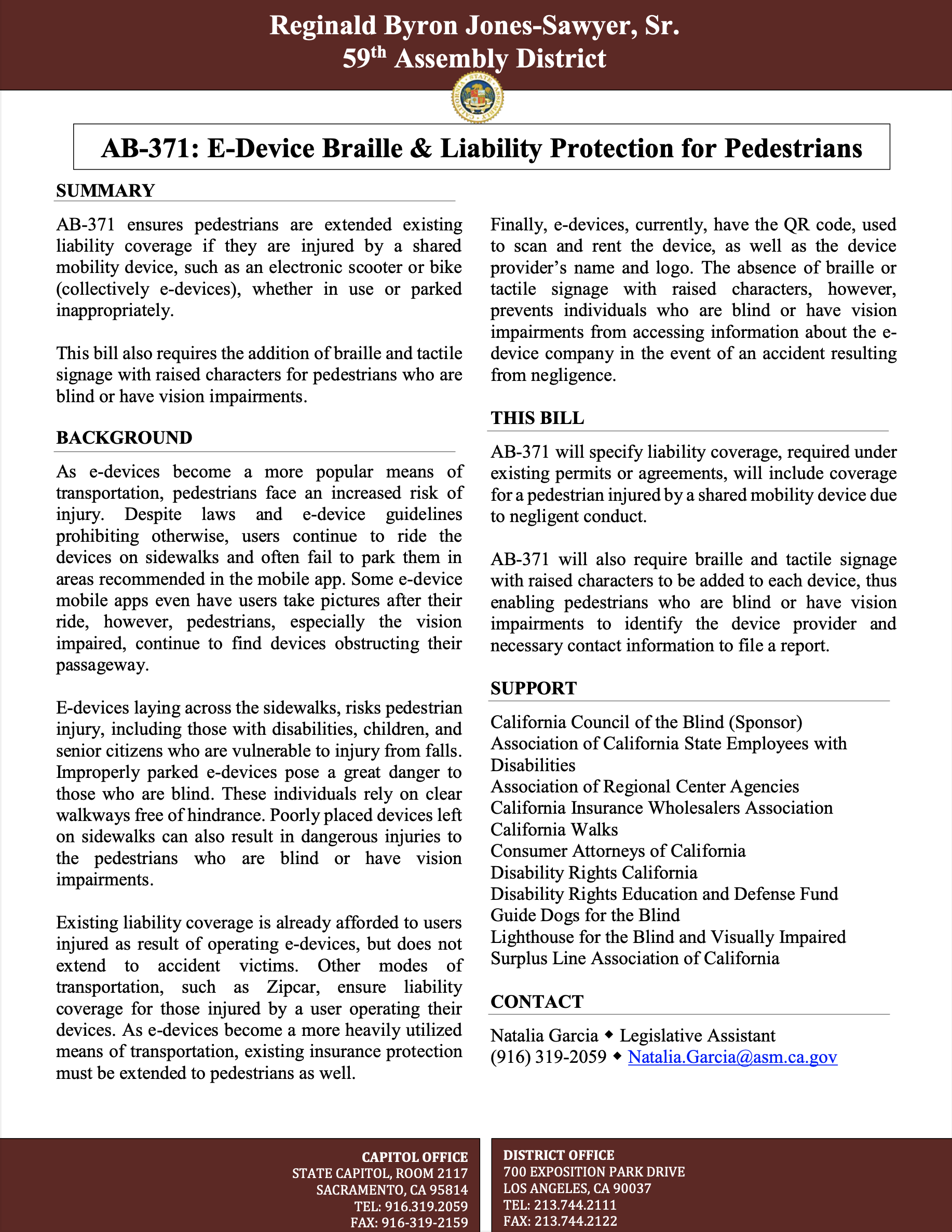 False And Misleading Arguments Against AB371

You might think the provisions of AB371 are both sensible and non-controversial. Indeed you might even think that this is a bill that people who drive shared mobility devices would be delighted to support, as indeed they should; without it they face potentially devastating liabilities.

In essence the CBC arguments are that:

CBC is fear-mongering to scare ride-share supporters with wrong information and baseless claims, and working to kill legislation that is exceptionally beneficial to both SMD users and pedestrians.

CBC claims that requiring $100,000 third-party liability insurance for SMD users is an anomaly because it is not a requirement made of the auto rental industry, but the two are not the same and to compare them is misleading.

Renters of autos are required to carry third-party coverage and many already have it so it would be redundant for an auto-rental company to provide third-party liability insurance for most auto renters.

The real anomaly is that renters of motorized scooters and motorized bikes - all of them motor vehicles - are not required to have third party liability insurance. Pedestrians need insurance to recover costs inflicted by negligent drivers of ride-sharing vehicles.

So as a matter of public policy it makes sense to provide that insurance through the rental company.

Ignorance Is Not Bliss. Ignorance Can Cost A Bundle.

Car drivers are required to have third-party liability insurance. Unfortunately many motorized scooter renters assume their auto insurance covers them, but in most cases it doesn't which is why AB371 includes a warning to be given to renters to check with their insurers whether they are covered. Good advice!

At present if a scooter driver injures a pedestrian the pedestrian has no one to make a claim against. That's what AB371 is trying to fix.

If The Cost Of Insurance Was As Huge As CBC Claims, Shared Devices Would Be Too Dangerous To Be Allowed On Our Streets

The critical issue then is whether providing insurance to protect pedestrians and property owners in the event of injury or damage from negligent scooter drivers would be a prohibitive expense as CBC claims. This is a peculiar assertion because if it was true, the entire rationale for shared devices would be brought into question. To claim that the cost of doing so will be so huge as to put multi-billion dollar scooter rental firms out of business raises a serious question about the safety of motorized scooters and other shared mobility devices.

The cost of insurance reflects the risks associated with it. If the California Bicycle Coalition's claims were true then the risk that drivers of shared mobility devices are going to hit and injure or kill pedestrians or damage property would also be huge. But in that case, why on earth would the California Bicycle Coalition want people to drive them in the first place?

The truth is that though such incidents do occur, they are relatively infrequent, and much less frequent than drivers simply falling off a motorized scooter. If a fall is due to the negligence of the rental company, the driver is covered by the General Liability insurance the company is already required to carry but if the driver is negligent and hits a pedestrian there's no protection for the pedestrian.

By the way, if you know of an incident when a scooter driver hit a pedestrian, whether or not they caused injury, please let us know the details if possible: date, time, location, severity of injury and the name of the rental company.

Note that CBC makes its claim that this cost will be both "onerous" and "huge", (in an earlier version) and a "burden", (current version), with no evidence to support it. It's simply an assertion.

What then of CBC's other claims?

The claim that provisions of AB371 are "unprecedented" ignores the information about the liability provisions of car share companies such as Zipcar as explained in the Fact Sheet displayed above.

In our view, when it comes to injuries sustained by pedestrians, both the companies and the users, should each be liable for their own negligence, as our submission to the Senate Insurance committee proposes.

Both parties may be negligent and injure someone or damage property both when a SMD is in use and when it is parked. Some examples may help.

Our submission to the Senate Insurance committee explains this in detail but essentially the shared mobility device company knows where and in what condition its device has been left and when the renter ends the ride the device reverts to the possession of the company, which usually is immediately offering it for rent again. The SMD companies also employ people to stage, rebalance, and maintain their vehicles as well as people to address problems they create. So the SMD company might be held liable for negligence if it fails to address the problem in a timely manner.

That timeliness is the other side of the liability coin as the company rightly could say that even though it knew of the problem it did not have enough time to address it before the fall occurred, in which case it could argue that the renter, who left the vehicle in the hazardous condition, was negligent and thus liable for the injuries sustained. In that case both parties may have been negligent and both might be held liable, each for their own negligence.

For CBC to claim that the rental company is being required to be held responsible for the negligence of the device renter is again misleading and inaccurate. The SMD company could be held negligent if it knows of yet does not address a parking hazard created by one of the devices in its possession and the renter could be held negligent for leaving the vehicle in such a condition, if the time between ending the ride and the accident was short enough.

But what AB371 does not do is impose responsibility on the SMD company for the negligence of the renter. Rather each might, and we believe should, be held liable for their own negligence.

There's yet another misleading claim that seems to be about how terribly unfair AB371 is because drivers of cars are not required to carry any third party liability insurance that covers someone else causing injury. The argument seems to be that if, say, I let someone else drive my car, i.e. I “share” it, and that person hits someone when driving it, my third party auto insurance won’t cover them and that's true. But for someone to drive my “shared” car he or she must already have third party liability insurance. It's a legal requirement. Every driver must have third-party liability insurance in order to drive a car, but that's not the case with other motorized vehicles like motorized scooter or motorized bikes. Again a scare-mongering claim is being made based on a false comparison.

Feel free to check out the above as well as a plethora of other fanciful claims made by the California Bicycle  Coalition and their Executive Director on the blog of their website. It contains a deliberately misleading screed that would be a credit to Russian disinformation trolls designed to scare their numerous supporters into expressing opposition to a bill that will help protect pedestrians, especially the mobility and vision impaired so please don't forget to send your letter of support for AB371.