Who Is Involved In Safe Walkways?

Our group started in San Diego, USA, in early 2018, soon after rental scooters arrived. The problems they create for pedestrians were immediately apparent: obstacles and trip hazards from parking on sidewalks, injury from being hit and fear from irresponsible and illegal driving on sidewalks.

From the start we have been advocating for the City of San Diego to act to deal with these problems and restore safety for pedestrians and we now have members in many other cities and countries and share information to help people preserve and restore the safety of the walkways of their cities.

Below is some background on some of the people involved in the group.

As a transit advocate, I was awarded Transit Advocate of the Year by the Kansas City Regional Transit Alliance in 2003, I support transportation alternatives that get people out of cars. However, I do not support alternatives operating in a manner that regularly risk other people’s welfare or civil rights. So I was horrified when mobile app-based rental e-scooters (rental scooters) landed in San Diego functioning as a dangerous plague on the sidewalks. Unilaterally, Mayor Faulconer abandoned our encroachment laws and let scooters park all over the sidewalks. It became clear very quickly that if scooters park on sidewalks, then renters drive on sidewalks, even though it is illegal. I was incensed, as were many San Diegans.

These vehicles strewn all over our sidewalks and driven recklessly are not a "nuisance" to tolerate because some people like to use them. My motivating outrage relates to my blind and wheelchair dependent friends losing their civil rights due to how the rental scooter businesses are allowed to operate. The Americans With Disabilities Act is Civil Rights law. The City has a legal obligation under federal and state statutes to provide a free and clear accessible route on sidewalks, both for wheelchair users and people with low-vision. That still isn’t happening. The blind trip over the scooters and people in wheelchairs have lost their independence, since they need a helper to clear their path. We all fear being hit by these silent menaces on the sidewalk.

February 2022 marks four full years of rental scooters in San Diego. Safe Walkways is making a significant impact on scooter regulations and I support the legal use of scooters in the streets, but our work is not done protecting pedestrians on sidewalks.  Unfortunately, when a city allows the civil rights of people with disabilities to be trampled for four years so that people can joy ride, I see callous indifference fed by the almighty dollar. So I work to fix the problem. I hope you will, too.

From early 2018 I began campaigning to have safety restored to the walkways of my city, San Diego. The impetus for this was personal. Walking back from an event along a path in Balboa Park, my dog was hit in the head by a man driving a motorized scooter. Had he been hit a fraction of a second later the impact would have been to his body and I am sure he would have been killed. As it was he was shocked and dazed but otherwise unharmed.

What I found almost as upsetting was the attitude of the driver, who blamed me for the accident, claiming my dog, (who was on a leash), should have been "under control". Bear in mind that we were walking on a pedestrian path in a park where motorized vehicles of any type were illegal. Before he left I asked the man, who was using a scooter for the first time, to please, set the scooter aside and walk the rest of the way. He didn't and instead sailed off along the path, at full speed, as he had before. I soon learned that his was not an isolated attitude.

Around the same time my neighbors downtown started telling me of their fear to go out walking, especially in the evenings. Scooters were passing them silently, at full speed, missing them by inches. Some are elderly and they told me that if they were hit by someone driving a scooter and suffered a fractured hip it "would be a death sentence". Not quite believing them I researched the statistics and realized that their fears were well founded. CNN.com reported in May 2019 that "One in three adults aged 50 and over dies within 12 months of suffering a hip fracture. Older adults have a five-to-eight times higher risk of dying within the first three months of a hip fracture compared to those without a hip fracture."  For my elderly neighbors the places they used to feel were safe to walk were no longer safe because people, usually tourists who were first time users ignorant of the rules and using scooters for fun, were afraid to drive them in the street, so they drove them on sidewalks and walkways instead.

Then I learned of the problems people living in Pacific Beach and Mission Beach were experiencing - again tourists behaving irresponsibly leaving their scooters blocking access, creating trip hazards and creating fear for walkers.

And so Safe Walkways was born to advocate for our City to rectify the problems. Four years later and, although we have had a number of successes, including having high pedestrian traffic areas like the Martin Luther King Promenade  and the Mission Beach Board walk restricted to rental scooters and motorized traffic respectively, there is still much left to do, unfortunately. 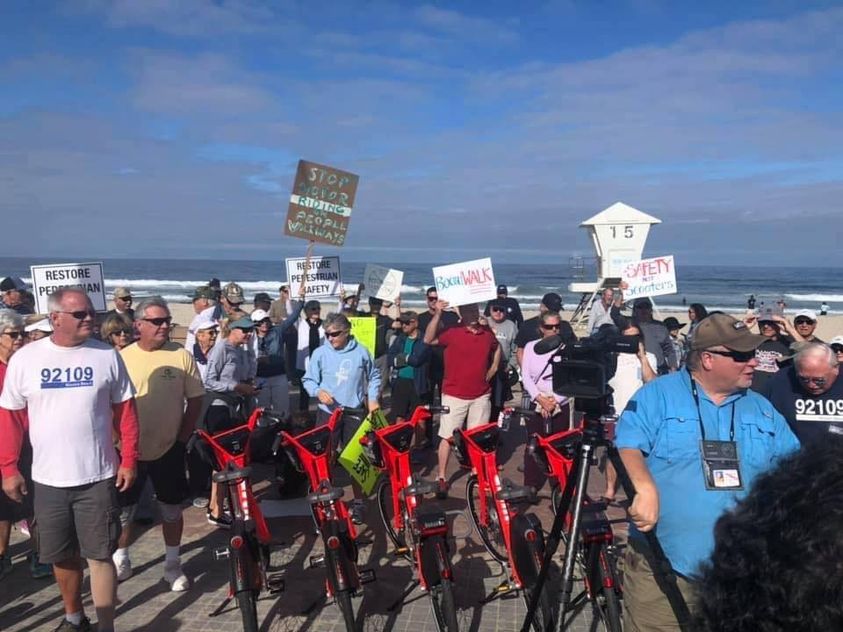 Residents of Pacific Beach and Mission Beach protest the mayhem created by motorized rental vehicles on the boardwalk.

The City That Doesn't Care

San Diego can be regarded as "Ground Zero" for the origin of the motorized scooter rental industry as the boardwalk of Mission Beach was the location where in 2017 Travis VanderZanden, who established Bird Rides Inc. tested out the use of motorized scooters with his friends.

San Diego is a prime example of the multiple safety problems the scooter rental industry creates for the public because they have remained unresolved now for years. In 2021 alone the City of San Diego received over 28,000 complaints about the parking of rental scooters.

San Diego is where an industry is inadequately regulated and compliance with those inadequate regulations is neither monitored nor enforced.

The problems created by the scooter rental industry and its users, which particularly hurt the disabled, are not hidden or secret, but manifestly obvious on a daily basis. Given the years-long, willful blindness shown by the City of San Diego to them: a year and a half of doing nothing followed by creating an ordinance to protect itself from liability but doing almost nothing effective to protect the safety of the public, it may be time to come up with a replacement slogan for "America's Finest City". If New York is "The City That Doesn't Sleep" then it seems that San Diego is "The City That Doesn't Care".

As a result it has been necessary, sadly, for members of the public to campaign for their City to address its primary responsibility of ensuring public safety. That then is the remit of Safe Walkways. 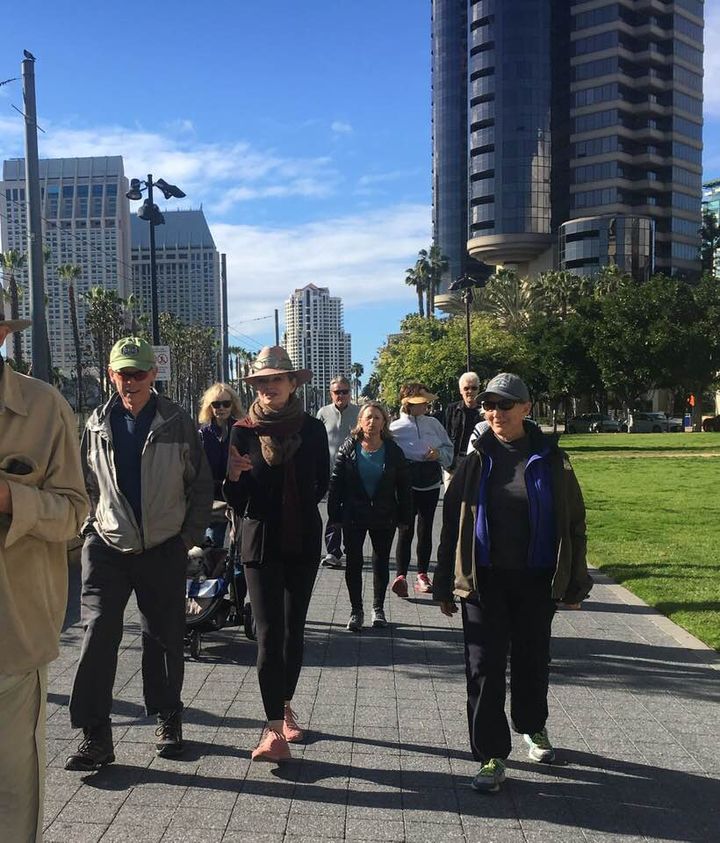 A protest walk along the MLK Promenade. 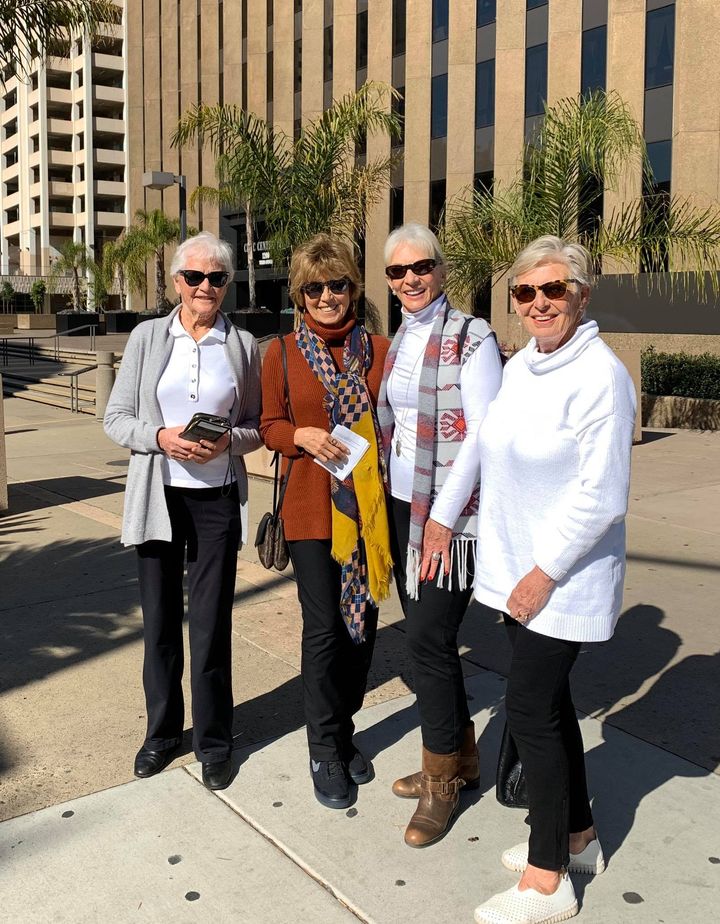 Supporters on their way to a Council meeting.